How to Convert Manual Tests to Automated Tests? 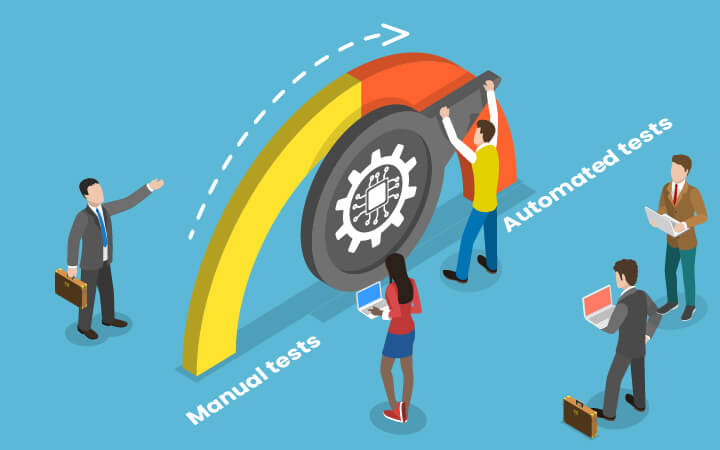 Software developers worldwide are adopting a more agile approach to their work. According to the State of Testing report, 92% of respondents claim to follow the agile methodology in their development process. This rise in agile adoption has coincided with test automation, as more firms look to shorten development cycles and achieve quicker market releases. The same report also stated that close to 90% of organizations today actively implement test automation as part of their QA approach. Unfortunately, not all organizations have seen the desired results with automated testing. This mismatch could be due to several factors: using the wrong strategy to convert manual test cases to automated tests is one of them.

We’ve compiled a list of 8 rules to help you mitigate issues and achieve quicker ROI with test automation.

Testing scenarios can get very complicated, very fast. Moreover, most test cycles work with thousands of test scenarios. Without prioritization, there’s a good chance you’ll end up reducing your possible ROI from automation. After all, functional tests are just one part; there are performance tests, regression tests, and UI tests.

The first step to automating your manual tests is to build a proper strategy that outlines your priorities. You can then use this outline to rank all the tests in order of importance. For instance, essential workflows such as user login and checkout will rank high on this list.

Run automated tests for your most important user scenarios first and then move lower along the list.

Once you have the high-priority user scenarios in hand, the next step is to break them down into simple, atomic flows. Build different automated tests for each simple flow.

There are three primary benefits to building single-purpose tests:

● First, they run faster and help save crucial testing time.

● Second, it’s easier to identify bugs and defects when only one flow is tested at a time.

● Third, it’ll be much easier for you to reuse and recycle different test cases.

3. Maintain Consistency in the Initial States of the Test

There are several ways to maintain consistent initial states.

● Eliminate dependencies between tests and workflows in all scenarios other than integration tests. The AUT’s state after a test shouldn’t affect the flow of the next test.

● You need to seed your application with initial data before each suite run.

● You should use conditions to handle only those cases in which tests are hard to set.

Complex tests usually replicate actual user scenarios, such as logging into the application. Ideally, this complex workflow should be broken down into simpler tests, as mentioned in rule 2, and then combined. This general practice will ensure that the complex tests will only fail due to integration issues that are easier to fix.

Additionally, running all the simple tests before combining them into a complex one will help you pinpoint where the test fails. You’ll be able to latch on to bugs and defects much more quickly.

Validations are usually left to the end of the entire test run to signify whether the test passed or not. But it is also advised to add validations at crucial checkpoints within the test itself. This way, the test will stop running if a major action fails, giving you more time to make corrections.

Another point here is to always use a predefined dataset for your validations. Continually updating your dataset will also cause changes in the validation results, making it harder to pinpoint defects.

We also recommend separating low-level implementation tests (ex., Set username and password) from those that use business logic (ex., Logging in). This act of layering makes test maintenance much easier. You’ll also be able to reuse test components actively in different scenarios instead of building brand-new tests every time.

The most crucial advantage that layering offers is accessibility. Often, in many agile sprints, the developers run the tests, and since they’ve not written the tests themselves, they’re prone to get confused. By keeping this rule in mind, even the developers and other non-tech stakeholders will be able to identify tests and run them quickly.

We’ve reiterated this fact several times – simplicity is the key to getting the most ROI from automated tests. Using too many If-statements and pre-conditions will make the initial state more unpredictable and return different results every time it’s run. Moreover, it may send the test run into a loop, making it too complicated.

Using a pre-fixed initial state and a specific flow without random A/B testing will help.

Automated tests have many pros, two of which are reusability and parallel testing. When translating manual tests to automated ones, try and create self-contained, independent workflows for each.

Most robust automated testing solutions offer parallel testing, which vastly reduces the overall testing time. And the faster you finish those tests, the faster the developers get their feedback.

If you’re looking for a similar solution to help you migrate to test automation, then book a demo with us today!